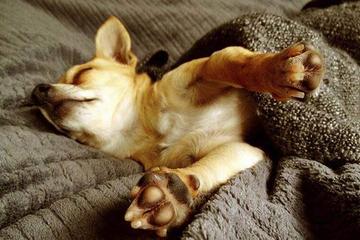 I have never stayed here overnight (I live just a few minutes away, so why would I?) but I've attended their summer concerts multiple times. The events are lots of fun and you can bring your dog (if s/he isn't stressed out by music and loud noises). All of the staff were very kind and welcoming to both my large and small dog. 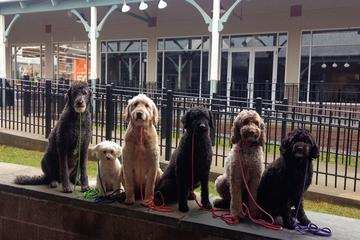 Most stores are NOT dog friendly

The only store that's dog-friendly is the pet store. Don't come here expecting to shop anywhere else if you have a dog, unless you have someone else with you who can wait outside the store with the dog. I recently traveled to St. Petersburg with my small dog and I was disappointed by how few of the dog beaches were dog-friendly. This was definitely a treat to have a beach where dogs could swim play off leash on the sand. My only complaint there was that not all owners were supervising their dogs very closely and my little dog (who is well socialized and usually very comfortable with big dogs) got chased multiple times by a much larger dog that appeared to be going after her in a more predatory than playful manner.. It took the owner a while to notice and then get her dog back under control. After this my dog was pretty shaken up, so I took her into the fenced park area which was divided for small and large dogs. It's not as fun as playing on the beach, but at least she didn't get picked on.

The park is enormous, but the rest of it isn't dog-friendly at all, which is a shame. I couldn't even go out onto the fishing pier where I'd wanted to look for dolphins because dogs were not permitted there (yet poorly behaved humans were.) 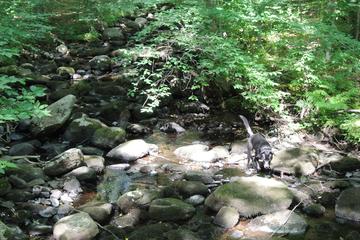 Great place for on leash hiking

I live in town, so I bring my dogs here all the time. It's a great place to go in the summer because it is heavily wooded, shady, and much cooler than the beach (although it can get buggy). The park is full of well-marked trails and you are likely to encounter other walkers with dogs. I wish that dogs were allowed off leash because hiking on some of the steeper trails with a leashed dog can be a bit difficult, but overall it's a great place and I understand the reasoning behind the leash requirement.

People aren't always good about picking up, but there are pickup stations with bags and disposal bins all throughout the park so there's no excuse not to. 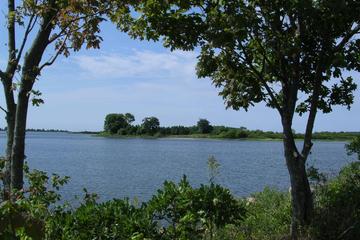 I enjoy bringing my dogs to Bluff Point. The trail main trail is pretty wide and well maintained, but be aware that you are likely to encounter bicyclists and even people on horseback, so if your dog is reactive to those things, this might not be the best place to visit.

Dogs must be on leash (this is heavily enforced) and you must be careful the bikers don't run you over, as they aren't always very considerate.

There are great photo opportunities at the end of the trail when you reach the bluff overlooking the Long Island Sound. 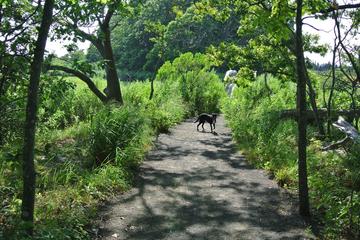 Better for dogs in off-season

I live in the area, so I bring my dogs to Hammonasset all the time (and they get so excited when they realize that's where we are going). I prefer going in the off-season, though, because it's less crowded and dogs are allowed on the beach (October 31-April 1, I think). I don't go on hot, sunny summer days because the park is full of people and it's just too hot for the dogs, since most of the trails are in direct sun.

People aren't always good about picking up after their dogs (eew) and I don't think bags are provided any more, but there are dumpsters around the park to dispose of waste year-round and there's no excuse for leaving it behind or bagging it and leaving the bag on the side of the trail.

The nature center is great, too, and if your dog is well-behaved, they will let him/her come in and you can look at the fish, marine invertebrates, reptiles, amphibians, and birds.

Remember, dogs are NOT allowed on the beach in the peak season and there are rangers at the park who will enforce this rule. Also, do not let dogs go on sand dunes/grasses (people shouldn't, either) or into protected shorebird habitat. 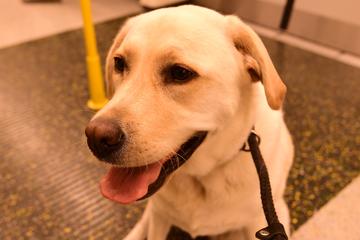 I've brought both my big yellow lab and my small chihuahua mix on the Metro North Railroad from Connecticut to Grand Central. I usually leave from the West Haven station, though. The train can be crowded at times, but if your dog is well-behaved, doesn't bother people, and doesn't occupy a seat then you shouldn't have any problems. (Once you get into the city, however, you cannot ride on the subway unless your dog is small enough to fit in a carrier, and again, if can be super crowded, so make sure your dog doesn't mind being cramped in very close quarters with strangers. )