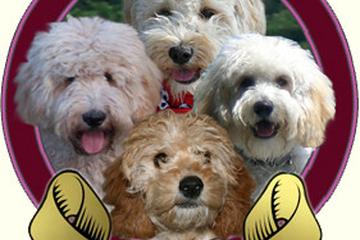 One is Great and Two are Even Better!

We first saw a Cavapoochon several years ago and held her when she was about 9 weeks old. We fell in love. Fast forward several years and we were ready for a pet. We contacted the friends and got the name of the breeder they bought their little puppy from. That is how we found Linda and Steve Rogers at Timsehll Farm.
We talked with them many times in the fall of 2016 and in February of 2017 our little Cavapoochon was born. We picked her up at the end of March, 2017 in Arizona and flew her home with us. She is the best little traveler. Always has been which is great because we are on the go a lot and she fits right in.
Our vet loved her too - truly, everyone does. My parents have never allowed a dog inside their home. I have had many wonderful dogs over the years but Dixie is the only dog they've ever welcomed into their home. She's sweet and very well-behaved. She's a resilient little thing too as she's very rambunctious and has sustained the craziest bumps and bruises, recovering with no ill effects.
We had a trainer work with Dixie and with us. The trainer does not board animals. However, after working with Dixie for a while, she welcomed Dixie into her home for a 10 day visit while we were out of the country. The trainer thinks that she and her family will get "a Dixie" when they add to their animal family.
Long, long story, we enjoy Dixie so much that we wanted to get another Cavapoochon for her to play with. So, back to Linda and Steve! We wrote to them and told them that we wanted a playmate for Dixie. After several emals and lots of photos, we were able to get a new little puppy. He is Dixie's half-brother - they have different moms but the same dad.
He is a joy too. We had Lnda and Steve send him to us via their courier (really nice guy). We took him to the vet we use now and he gave him a clean bill of health. Both vets (Dixie's and Dude's) commented on the high quality of the breeder based on their physical examinations and the health checks of the puppies.
We've had him about a month and can't imagine life without him. Linda described his personality as putting the "fizz in the punch". I wasn't quite sure what that meant until we got him. He IS the life of the party and we probably shoud've named him FOMO! He absolutely never wants to be left out of anything.
Every where we have taken Dixie and now Lil Dude too, people love them and the puppies love everyone of all ages and dogs of all sizes.
We are so happy we got to hold our friend's Cavapoochon all those years ago. Wouldn't trade our two for anything!
Thank you Roger's family!!!