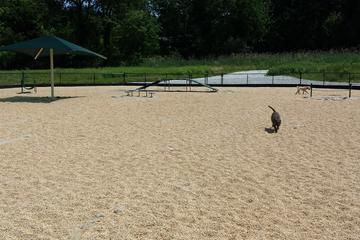 Nice dog park but the people there are terrible usually

The agility stunts are great but the people who go to the park are not very welcoming AT ALL. Especially the woman with the medium sized shitzsu (maybe?) and the guy with the yellow lab puppy (larger than my puppy I'd like to note) who were there today 4/4/19. When I first arrived the woman, who was on her way to her car stopped to stare at me while I got my dog out of the car. And then proceeded to question which park I was going to even though she had clearly already left.
The guy with the lab definitely discriminated against my dog and me bc I have a pit / lab mix, Happy. He literally stopped me from even going into the park bc he stood at the gate with his arms hanging over the fence and outright told me he didn't know if I should go in. I let him know that he was being pretty offensive and that maybe he shouldn't be at a PUBLIC park but I doubt he cares. Also just a PSA to everyone who goes to the Wayne Dog Park please pick up after your dogs...its part of being a responsible pet owner and its disgusting for everyone else. Probably one of the messiest dog parks I've been to. Thanks!