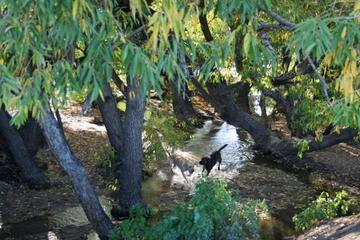 The worst thing about moving away has been that I can't take my dogs here every day. They get less exercise, and I have gained 20lbs.

This park is good for dog and human exercise. The trail around the outside is about 2.5 miles, and there are smaller routs to take too. There is a river, that at times is either almost dried up, or flowing too fast I won't let my dogs in, but most of the time it is great. There are some shady areas for you to cool off, but most of the area is a field. You don't have to worry about rattle snakes because it has been a dog park for so long they are no longer around.

When it is busy, like a Saturday in the summer, the north parking lot can be better to use, as long as you get through the main park gates before about 10:30 am, which is when the line to get in starts to grow.

There are outhouses by both entrances, but a water fountain only at the south one. 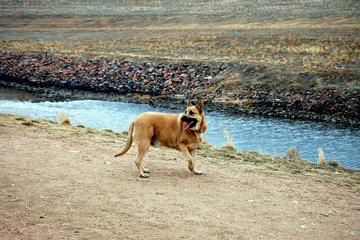 best park I have been to

Huge! good for dogs and for humans to get in a good walk. There are a lot of paths inside to take. They are good at keeping up with refilling bag stations. There are ponds here that dogs can swim in.

This park is less crowded than cherry creek, and it seems a little bigger since cherry creek cut off some of their area when they built the fence.

There are water fountains for dogs and people, and flushing bathrooms. 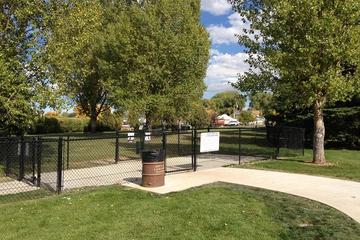 The grass and trees are nice. It is much larger than the other park in town. Overall, enjoyable. But, the city does not maintain it well-the poop bags are only refilled about once every couple of months, and no one with the parks department ever picks up poop. I also have seen at least 50% of the people here watch their dogs poop then not pick it up. It gets nasty. There is so much poop around the fence that sometimes I wonder why we go, but my dog gets the best running in here.

Also, it seems the city closes it once a year. They put signs up everywhere saying closed the month of may, but now may is over and it is still closed for some reason.

Some days the dogs here are nice and get along with my dogs. However, there are a lot of people that come here that don't understand they are supposed to control their dog. Younger over-excited dogs often won't leave my dogs alone, and the owners do nothing, so we end up having to leave. There are also some people with overly aggressive, not biting but way too aggressive, dogs who don't keep them away. One example is a family with 2 pitbulls who wouldn't leave my little dog alone, literally scaring the pee out of her. They never tried to control their dogs so we had to leave.

Along with the not controlling their dogs, many people do not bring leashes even though it is required, so if their dog attacks yours, good luck. I thinks maybe this is some kind of small town mentality, that they don't need to carry leashes or bring poop bags. 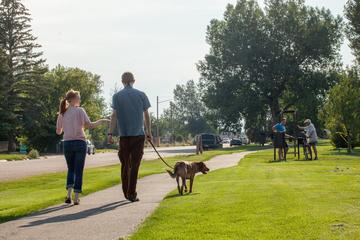 Overall it is an okay park. It is just a small rectangle, not sure why they made it so small when it is surrounded by such a huge field. There is a picnic table and a few little training obstacles for the dogs. The ground is rocky dirt, but in wet weather it is less muddy than the other dog park with grass.

There are poop bag dispensers, but they haven't been refilled by the city for the last 3 months, so bring your own. That is the main problem with the park, no poop bags, so there is poop everywhere around the edge and the city doesn't pick it up, and people forget to bring bags.

It would be nice if the city would build some kind of shade feature and add a water fountain, also there is no double gate like at most dog parks so if someone is already inside they usually have to hold onto their dog while you come in.

While not being as nice as the other park, it is usually less crowded and I have had less issues here with people not controlling their dogs.